Sustainability. It's a trending business initiative and seems like it's everywhere these days, making it's way into the C-suite at companies. But beyond this trend, what does sustainability actually mean, and more importantly, how do we translate sustainability goals into actual operational plans? 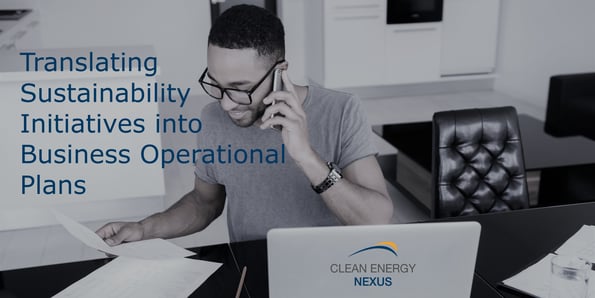 Sustainability is the "ability to be maintained at a certain rate or level" or "avoidance of the depletion of natural resources in order to maintain an ecological balance", according to the Oxford Languages dictionary. In reality, for companies with new sustainability initiatives, it means finding new ways to offset or reduce their carbon footprint without disruption to their operations.

Many corporations are following governmental and competitor led Environmental, Social, and Governance (ESG) initiatives by declaring goals to reach net-zero emissions by 2050. Some companies are even taking on more aggressive timelines and setting their sights on net-zero as early as 2025.

To reach an aggressive goal like this, corporations have begun to appoint and hire sustainability executives whose sole purpose is to reach that end goal of net-zero emissions. (For those unfamiliar with the term, net-zero means offsetting greenhouse gas emissions with carbon-negative actions, or taking emissions out of the atmosphere).

Gina McCarthy, former administrator of the Environmental Protection Agency and current White House National Climate Advisor, spoke at the Aspen Institute's Aspen Ideas: Re$et conference on Tuesday February 23rd and gave the example of President Biden's "whole-of-government approach" towards climate change and sustainability. This means they're undertaking the task of making sustainable changes throughout the whole of our government-run entities as those changes come due. Examples include replacing government vehicles with electric vehicles as each vehicle depreciates enough to age out of the fleet, and mandating more of each department budget be used to invest in clean energy solutions and infrastructure. This approach could be likened to replacing a standard lightbulb with an LED lightbulb, but only when the standard lightbulb burns out.

Chief Sustainability Officers, including Jeffrey Fulgham with GE Water, split their goals into internal and external goals. Fulgham has said that he has focused on reducing waste and the company's internal footprint, and has simultaneously focused on finding cleantech investments to help the company reduce their consumption of non-renewables.

Most sustainability executives are taking the latter approach to achieve their goals.

Internal footprint and waste reduction is often achieved by replacing old office equipment with new ENERGY STAR rated office equipment and technology, reducing the purchase and use of single-use water bottles by installing an in-office tap filter, minimizing the use of single-use cups and plates and cutlery and replacing them with reusable options, and supporting Fair Trade companies when it comes time to choose a coffee and tea distributor.

Investing in clean energy infrastructure not only offsets greenhouse gas emissions, but also produces clean electricity. The most common investments into clean energy are made in solar, batteries, and wind. Each of these are highly dependent upon the local weather and geography, and we're seeing more and more sustainability executives investigate and ultimately invest in solar as part of their operational plans to meet their corporate sustainability goals. Read about the most common paths to installing solar here.

Sustainability executives have their work cut out for them, and we're here to support them while they work hard to achieve their corporate initiatives and play a part in a larger goal to quite literally change the world.